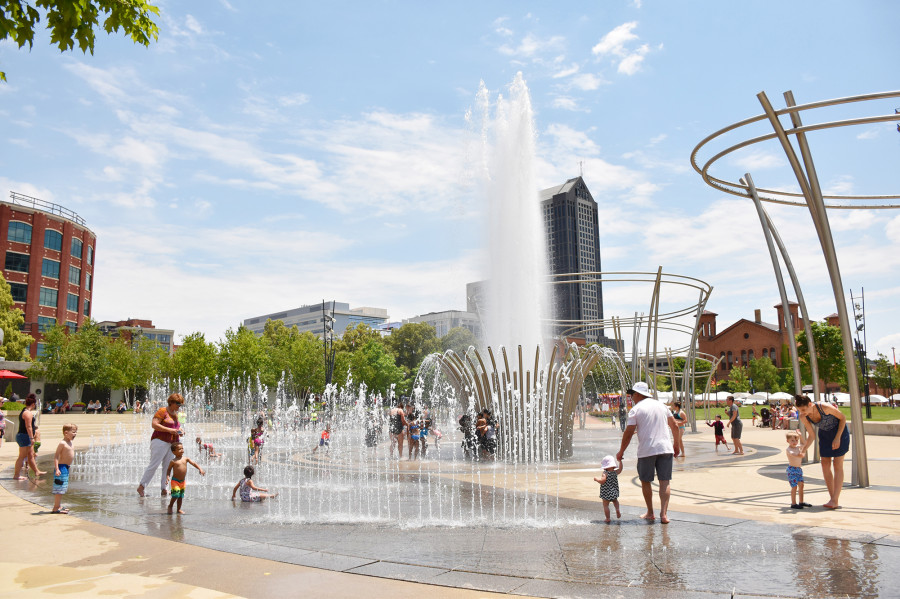 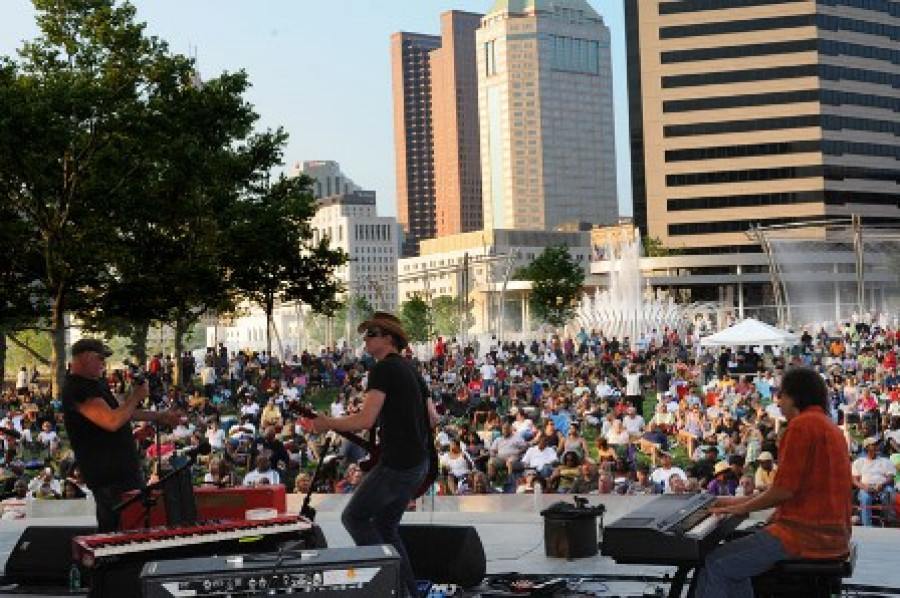 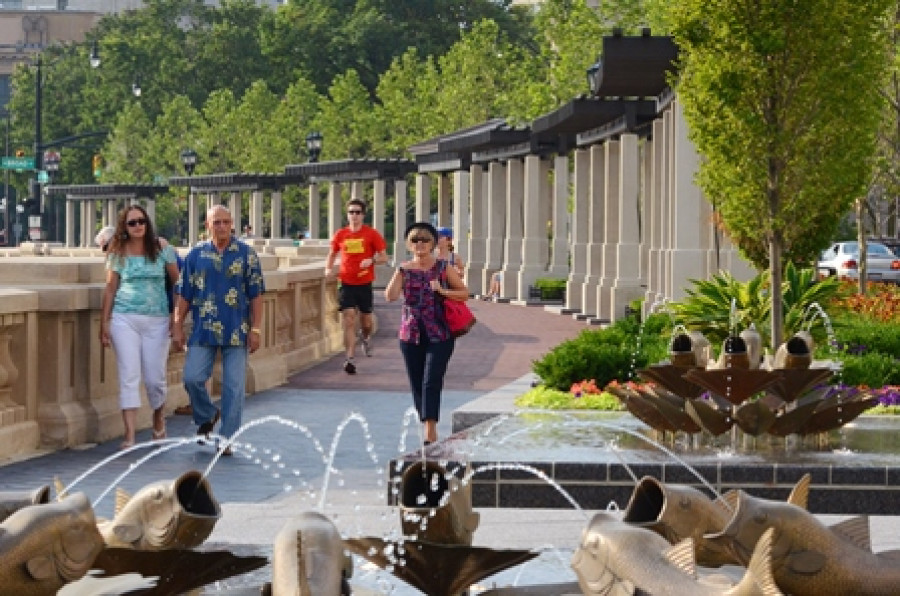 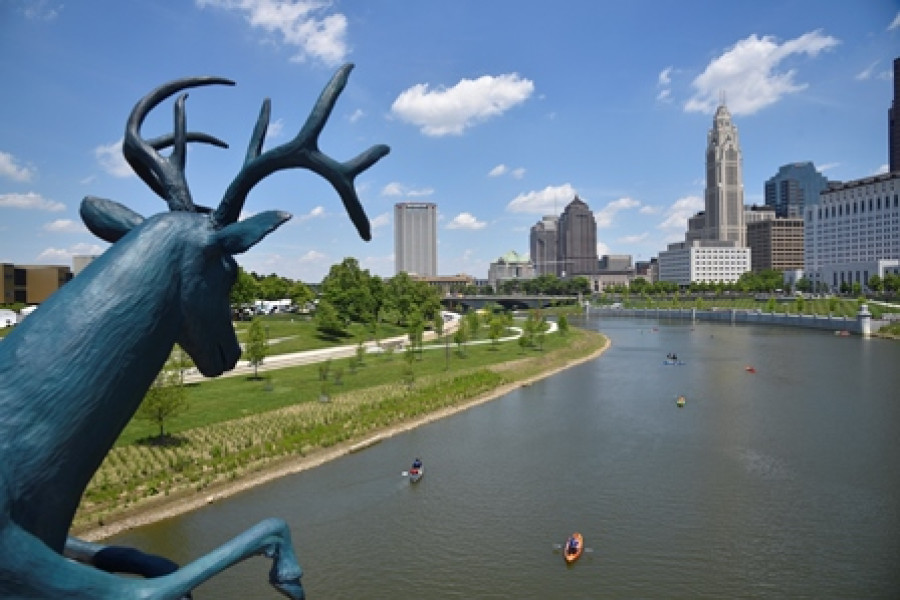 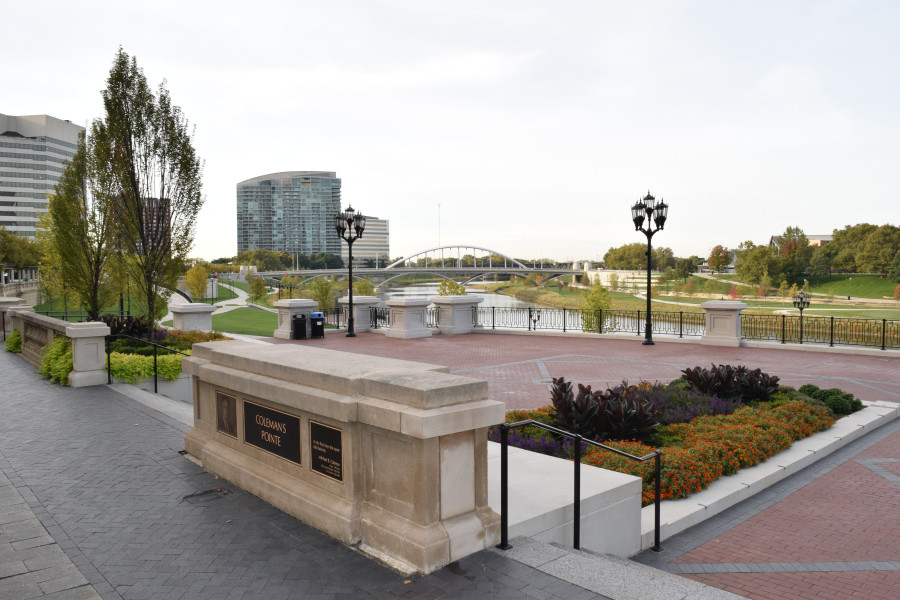 Looking at it now, it's hard to believe that the Scioto Mile hasn't always been a focal point in Downtown Columbus. To the contrary, the project transformed an aging, neglected civic resource into a vital network of public green spaces. It reconnected Downtown to the Scioto River with an integrated system of parks, boulevards, bikeways, and pedestrian paths. The resulting waterfront scene is the subject of national accolades: the Urban Land Institute jointly recognized the Scioto Mile and Columbus Commons as Urban Open Space Award Finalists in 2014.

Before construction began on the Scioto Mile in 2008, Civic Center Drive was a five-lane highway that served as a bustling pipeline to move employees out of Downtown. The beauty of the Scioto River was ignored as drivers blitzed past the riverfront at high speeds. Following the conversion of the street into one lane in either direction, the passage has since become a calming, pedestrian-friendly corridor. The Scioto Mile's Promenade wraps along the river from Broad to Rich streets and showcases a series of water features, benches, swings, gardens, and tables. Special attention was paid to incorporating historical elements such as the Town Street Prow and restoring the beaux-arts limestone carvings of the Promenade balustrade.

At the south end of the Scioto Mile, stands the John W. Galbreath Bicentennial Park. The park was updated with three world-class elements that attract visitors by the thousands. First, a stunning 15,000-square-foot fountain with state-of-the-art lighting and effects; it does double-duty as a water playground in warmer months with over 1,000 jets shooting water as high as 75 feet in the air to the delight of families who come to the park from all over central Ohio. There is also Milestone 229, a restaurant that sits at the edge of Bicentennial Park, on the corner of Rich Street and Civic Center Drive. Milestone 229 offers indoor/outdoor seating so that diners can appreciate the beautiful surroundings. Finally, the park boasts an eye-catching band shell. Since the park's opening in July 2011, it has hosted an eclectic array of touring artists, local musicians, and arts organizations during the Rhythm on the River series.

The Scioto Mile is a model of the type of successful public-private partnership for which CDDC is renowned. Completed on budget for a cost of $44 million, half of the project was funded from public sources and half was funded with investment from the private sector. Further, CDDC has established an endowment with The Columbus Foundation to provide for the ongoing maintenance and upkeep of the Scioto Mile. As a result of this forethought, the Scioto Mile will remain an amenity to be enjoyed by Downtown Columbus residents, workers, and visitors for years to come.

Although public and private investment in the Scioto Mile had successfully transformed the riverfront in time for the City's 2012 Bicentennial celebration, the Scioto River itself remained a slow-moving, overly-wide pool of sediment-laden water due to the presence of low head dams. The Scioto Greenways project changed all this, transforming the condition and appearance of the river and its banks.

The concept for Scioto Greenways was first presented to Columbus as part of a comprehensive public process that ultimately resulted in the 2010 Downtown Strategic Plan. Of all the ideas presented to the community in the Strategic Plan, Idea #12 (the Scioto Greenways) became priority #1. The City of Columbus engaged CDDC to develop and execute the comprehensive project plan for the Greenways. Following a feasibility study, CDDC secured $36 million in funding from generous public and private partners.

Scioto Greenways consisted of three primary components: 1) Removal of the low-head Main Street Dam, 2) Restoration of the Scioto River channel to its natural width, and 3) The creation of 33 acres of new urban greenspace complete with 1.5 miles of multi-use pathways, nearly 800 trees and more than 75,000 plant features. In November 2013, the project began, and working against an aggressive 24 month schedule, during a period of record-low temperatures and record rainfalls, the Scioto Greenways made its public debut right on time in November 2015.

As a result of these projects, the river's natural ecosystem is healthier today than ever before. It has become an accessible urban amenity for Downtown's residents, professionals and visitors. Today, visitors to the Scioto Mile can stroll, ride or run along multi-use pathways that are wide enough to accommodate two-way traffic; pause to take in the views at Coleman's Pointe or the Lower River Walk; lounge on the lush lawns; hit the water on a kayak, canoe or paddle board at one of four launches; or simply claim a space to rest on one of the many benches within the park.